Posted by gregoryfritz on November 29, 2011
Posted in: Uncategorized. Leave a comment

Nancy and I visited our friend, Terri, maybe for the last time yesterday morning. Her body has been increasingly suffering from the effects of multiple-sclerosis since we first met her several years ago and now she is lying in a hospital bed with only days left to live. It felt surreal to me as we interacted with her. He body is loosing the battle, but her mind and spirit remain as strong and beautiful as ever. As we chatted about the transfer of various tasks from Terri to us and other people from our church, it felt like a staff meeting before the boss was leaving on a trip. We joked, prayed, read scripture, and said “Good-bye.” Terri spoke a word of blessing to me personally. How is it that this person can be so full of life today and probably gone by the end of this week? Permanently gone.

I honestly don’t know how to process this. I have questions that I am having trouble even verbalizing. I suspect that if I can formulate the questions that are haunting me deep in my soul that I will be able to find answers. But, that is not happening. On the other hand, I have noticed within myself an increased commitment to do good well. I somehow feel responsible to step up and fill some of the void that Terri is leaving. It is like she will be watching and I don’t want to let her down. Her unfinished ministry is now my responsibility, at least in part.

She asked me to read from Hebrews 11.

1 Now faith is confidence in what we hope for and assurance about what we do not see. 2This is what the ancients were commended for.

6 And without faith it is impossible to please God, because anyone who comes to him must believe that he exists and that he rewards those who earnestly seek him.

8 By faith Abraham, when called to go to a place he would later receive as his inheritance, obeyed and went, even though he did not know where he was going.

13 All these people were still living by faith when they died. They did not receive the things promised; they only saw them and welcomed them from a distance, admitting that they were foreigners and strangers on earth. 14 People who say such things show that they are looking for a country of their own. 15 If they had been thinking of the country they had left, they would have had opportunity to return. 16 Instead, they were longing for a better country—a heavenly one. Therefore God is not ashamed to be called their God, for he has prepared a city for them.

21 By faith Jacob, when he was dying, blessed each of Joseph’s sons, and worshiped as he leaned on the top of his staff.

22 By faith Joseph, when his end was near, spoke about the exodus of the Israelites from Egypt and gave instructions concerning the burial of his bones.

39 These were all commended for their faith, yet none of them received what had been promised, 40 since God had planned something better for us so that only together with us would they be made perfect.

12 1 Therefore, since we are surrounded by such a great cloud of witnesses, let us throw off everything that hinders and the sin that so easily entangles. And let us run with perseverance the race marked out for us, 2 fixing our eyes on Jesus, the pioneer and perfecter of faith. For the joy set before him he endured the cross, scorning its shame, and sat down at the right hand of the throne of God. 3 Consider him who endured such opposition from sinners, so that you will not grow weary and lose heart.

Posted by gregoryfritz on November 22, 2011
Posted in: Uncategorized. 1 Comment

I enjoy all holidays. However when forced to state my favorite, the American holiday of Thanksgiving generally comes to mind. Growing up in rural Pennsylvania, Thanksgiving was the biggest feast of the year. In my farming community large groups of extended families gathered for much of the day to tell stories, laugh, and eat. Before the main meal, there was a pause in the boisterous interaction when everyone expressed gratitude for something specific. Then a general prayer was offered. At that moment, all seemed right with God and the problems of the world seemed contained.

As we approach Thanksgiving this week, I wish everyone would experience true contentment and peace.

I realize that for many, all is not right with God and the problems of the world seem out of control. Therefore, I am committed to prayer. My daily routine includes a time of focused intercession. I would like to pray for you. If you send me your specific prayer request, I will add it to my prayer list. You can write to me at gregoryfritz116@gmail.com. I will keep your request confidential. 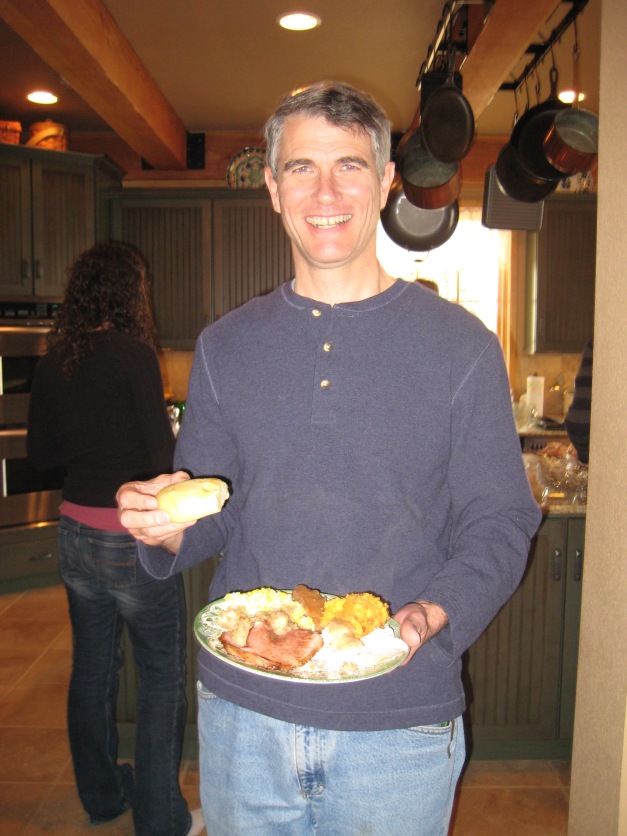 See, I love Thanksgiving! This was a feast several years ago at my sister's house.

Posted by gregoryfritz on November 16, 2011
Posted in: Uncategorized. 1 Comment

In my last post I noted that one of the insights that arose from Robert Clinton’s research on biblical, historical and contemporary leaders is that few leaders finish well. Clinton dug deeper into this issue and discovered “six barriers to finishing well.” It is good to know and be reminded of these common problem areas. Awareness of these leadership tendencies is a first step in avoiding them.

Barrier 1: Finances — their use and abuse. Responsible leaders diligently work to insure that their organizations function at high levels of financial accountability and transparency.

Barrier 2: Power — its abuse. Responsible leaders don’t consolidate power. Instead, they distribute power. Consolidated power is efficient and can be effective in the short term. However, over time power tends to corrupt and results in abuse of people and other organizational resources.

Barrier 3: Pride. Responsible leaders genuinely pass accolades on to others. The Bible is not kidding when it says that pride precedes destruction. Humility might be a rare characteristic in leaders, but it is valuable.

Barrier 5: Family — problems between family members. Responsible leaders consider their family relationships as one of their most important ministries. They give sufficient time and attention to maintain these relationships at a high level.

Barrier 6: Plateauing. Responsible leaders continue to learn and grow through their entire lives.

Posted by gregoryfritz on November 14, 2011
Posted in: Uncategorized. 2 Comments

This blog was first published November 14, 2011. In light of the conclusion of the trial relating to Penn State, Paterno and Sandusky, it seems appropriate to republish this reminder/warning.

Near the end of George Verwer’s address to the Mission Catalyst Inland NorthWest conference this past Saturday evening, he pleaded, “Please pray for me. I am 73 years old and I don’t want to mess up. I want to finish well!” The fact is, according to research compiled by Dr. J. Robert Clinton of Fuller Seminary, few leaders finish well. He studied biblical, historical, and contemporary leaders and the results were similar. In each of these categories statistically few leaders finish well. Verwer has been in organizational leadership most of his life and he is personally aware of this unfortunate reality. He has watched many leaders fail.

During the past week I have joined other Penn State alumni in morning the fall of Joe Paterno and other PSU leadership. Before the Sandusky scandal, Paterno appeared to be beating the odds and ending his career on a positive note. He was untainted. He had built up so much goodwill, that it seemed that he would cruise to the end of his career on a high note. However, now he has ended his career with a tarnished reputation. Everything he has accomplished during what appeared to be an exemplary career will forever be diminished by this incident. Even if it is proven that he did nothing wrong, he will be permanently tied to the event that forced him out.

The lesson for the rest of us: be forewarned! The odds of us finishing well are small. Be diligent to build your character, protect your reputation, and pray for God’s grace. Avoid sins of commission and omission. If George Verwer is concerned about finishing well and if Joe Paterno can be taken out at this sage of his life, you and I are vulnerable.

How to read a book

Posted by gregoryfritz on November 8, 2011
Posted in: Uncategorized. 2 Comments

Yesterday in an informal, non-academic situation an upperclassman approached me with, “Professor Fritz, I have a question.” Generally that means the question has something to do with school. I enjoy this kind of interaction, so I was eager to hear her problem. Her concern was a five page paper on a book she had not read. She needed help figuring out how to read an entire book and write a report in a couple busy days. So, I passed on some of the most practical wisdom I received from my mentor, Dr. Robert Clinton.

You don’t have to read every word in a book to “read a book.” In fact, to linearly read a book from front to back can be a waste of time. There are too many books that should be read to approach them in such a time consuming manner. Instead, we should expedite reading.

Here are the steps that I generally follow when reading an academic book.

I explained to the student that she could probably get the gist of the book by following these steps to the skimming point which would probably take her an hour or so. This would give her enough knowledge to write a good paper and intelligently engage in the class discussion.